We may earn money or products from the companies mentioned in this post.

Hydrogen peroxide. H2O2. In its purest form, it is a pale blue liquid, only slightly more viscous than water. Not surprising, given that hydrogen peroxide contains an additional atom of oxygen than water( H2O).

Hydrogen peroxide has many uses- it is an oxidizer, a bleaching agent, a deodorizer, and an antiseptic. It is a weak acid and is as useful to keep around the house as it is in chemical laboratories. It can be safely used for cleaning purposes in the home- and encompasses a variety of functions. H2O2 can be used to bleach laundry, clean countertops, and whiten grout- and this is just to start with!

A powerful oxidizer, the use of hydrogen peroxide comes with its fair share of cautionary measures. It can cause damage to the skin, eyes, and the respiratory system in case of unmitigated contact or absence of protective layering. It is corrosive and has been known to cause burns and tears in optical tissues when in contact with the same.

Hydrogen peroxide fumes are toxic in nature, and inhalation of industrial-strength compounds can be dangerous, and sometimes, fatal.

Due to its bleaching properties, hydrogen peroxide is often recommended as an alternative skincare product- claiming benefits in refining skin texture. This is a misplaced notion. The compound is certainly capable of causing allergic reactions and skin irritation.

Despite the many pitfalls to avoid, hydrogen peroxide is regarded generally as a safe product to keep around the house, given that there are resources to ensure adequate protection.

21 Brilliant Uses of Hydrogen Peroxide Around the Home 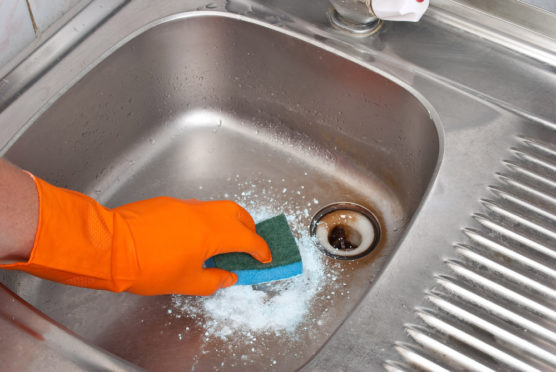 Sinks are often the most vulnerable to the quick accumulation of gunk and grime. Rightly so, given their innate function to rinse and thereby to also expose themselves to the dirt that is being rinsed.

Giving one’s sinks a periodic cleansing with hydrogen peroxide is an idea I reckon all homeowners must adopt.

Cake the surface of the sink with baking powder, and proceed to scrub. Following that, put a thin layer of 3-5% hydrogen peroxide solution on the sink and leave it on for a few minutes. Rinse. 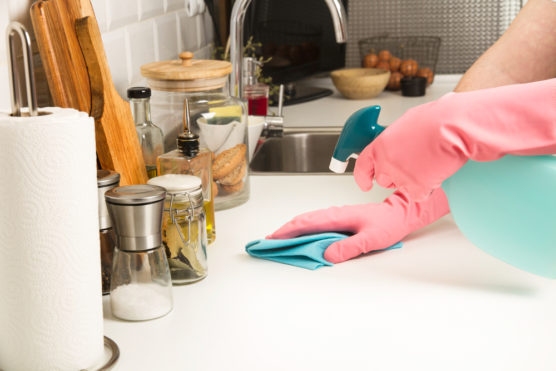 A clean kitchen is key to a healthy home. And by virtue of the same statement, it goes without saying that the countertops and cutting boards one employs to keep and cut food on also need to be clean.

Undiluted hydrogen peroxide has been proved to be effective in eliminating 99% of the germs on said surfaces. It also works as a bleach, and naturally works at restoring the original shade, of say, a grimy countertop. 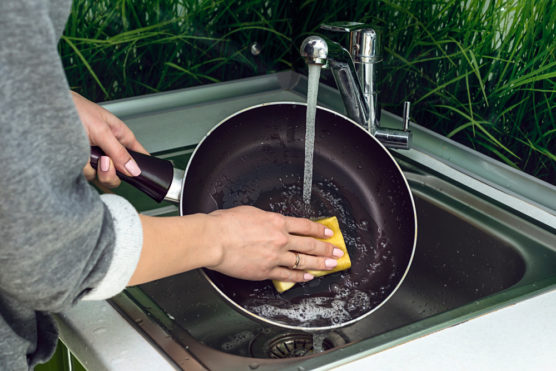 Pots, pans, and similar kitchen equipment are particularly susceptible to acquiring a layer of caked-on edible remains that thick over time until they become nearly permanent. Not only does it take away from the appearance of said cooking utensils, but it is also unsanitary to cook in it after a point of time.

Scouring cookware with hydrogen peroxide is recommended; sprinkle the base with baking soda, and follow it up with spraying on hydrogen peroxide. Leave it on for an average of 2 hours before rinsing.

I have always found that effectively cleaning a dishwasher is particularly tricky. One is ought to leave spots out- which either are perpetually neglected or willfully ignored. This leads to buildup which is hard to remove, especially in the rubber seals and crevices.

A good way to give one’s dishwasher a necessary cleanup is by virtue of this article’s focal point- hydrogen peroxide. A little bit of baking soda does not hurt. 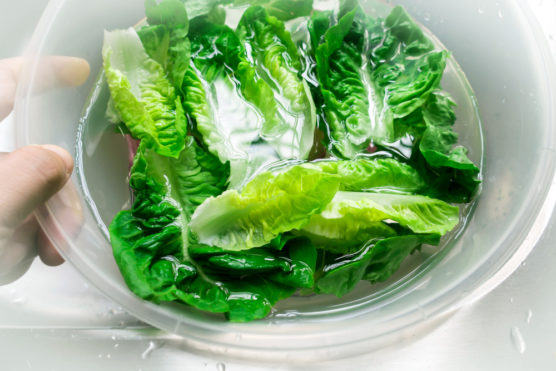 Vegetables and fruits, I strongly believe, are only beneficial when washed right. A careless rinse is liable to cause many bacteria-induced infections and maladies.

Vegetables are generally subjected to a 20-minute soak in hydrogen peroxide and water solution( 1/4th cup of H2O2 per gallon of water) and then rinsed. Root vegetables like potatoes, carrots, and beetroots might require half an hour to be properly cleansed of mud and soil.

Garbage disposal is an essential part of every household, and proper disposal even more so. Periodic cleaning of garbage cans with a 1:1 H2O2-water spray is beneficial, as it does kills bacteria growth and also eliminates any remnant dirt.

Pro Tip: Air drying in the sun is recommended for optimum results. 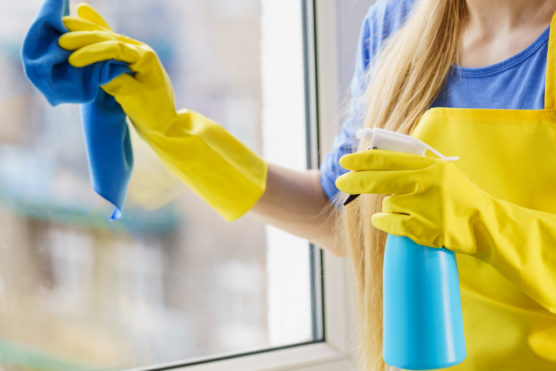 This applies to all glass surfaces in and around the house- countertops, tabletops, windows, mirrors, and sliding glass doors.

As with the previous point, a 1:1 hydrogen peroxide- water solution is what is required here as well. Spray onto the concerned surface and then wipe clean with a microfiber cloth, a tissue, or a cotton swab.

8. Get rid of Mildew

Mildew and mold are classic signs of an aging bathroom, one that has shown itself susceptible to damp. Spray the inside of a shower stall, shower curtains, exposed pipes, and any other place that has a mold growth with 3 percent undiluted peroxide.

Leave it on for a half-hour, before you rinse. The toxic fumes generated by the hydrogen peroxide kills mold growth. It may take a couple of tries to get the mold properly out.

Pro Tip: Scrub when you rinse to remove the stains caused by the mildew. 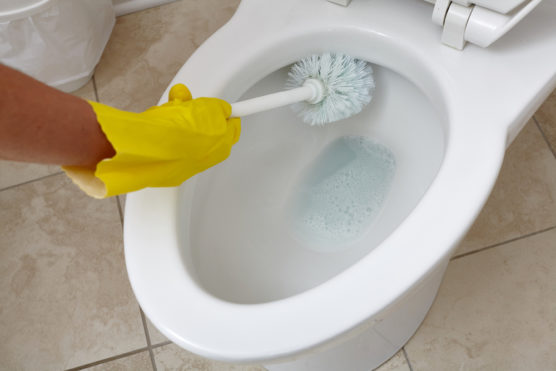 A common malady that most affects sinks and tubs, soap scum often proves itself rather difficult to remove. A scrubbing solution comprising the following ingredients is sure to do the trick.

It forms a turbid, bubbling mixture that can be used to scrub metal, marble, and fiberglass. 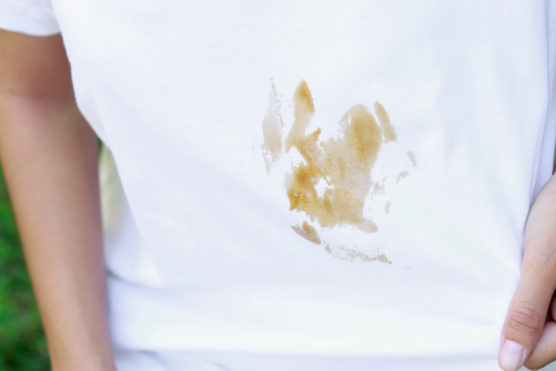 Hydrogen peroxide is sometimes referred to as the “Laundry Fixer”, and the title is true. It is excellent when it comes to stain removal, and is able to effectively remove stains of many different origins- ink, coffee, food, mud, etc.

Just put two spoonfuls of it in your laundry load, and you are set.

It is not always stains or scuffs that plague porcelain, it is sometimes the unfair consequences of age that render it dull and yellowing.

Baking soda and hydrogen peroxide can whiten it considerably. Scrub the surface gently with a paste of baking soda and water, and follow it up with a swipe of H2O2 saturated fabric. 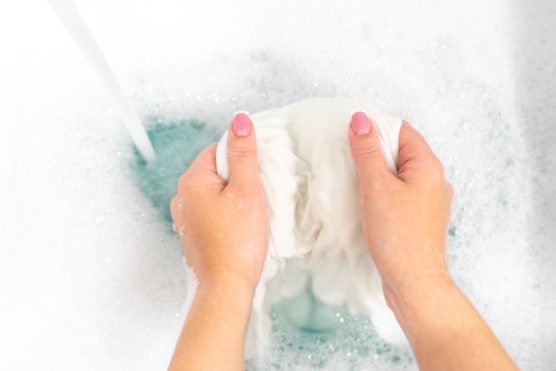 As with porcelain, clothes are also wont to acquire a dull facade over time. And while regular cleaning is imperative, detergent being abrasive often strips garments of their original color.

Soak graying garments and sheets in a homemade oxy-bleach concoction- it comprises 2 cups of washing soda and half a cup of hydrogen peroxide. Rinse after 2-3 hours.

Pro Tip: Be judicious about the amount of hydrogen peroxide you employ, too much of it can over-bleach or weaken the fibers.

Litter boxes, in all honesty, get filthy in a matter of days. It is important to clean them properly to ensure the well -being of one’s pet. Wash the container with hot water and liquid soap, and proceed to use a spray of full-strength H2O2. Let it sit for a quarter of an hour before you wash it off thoroughly.

14. Get Rid of Algae and Pond Scum 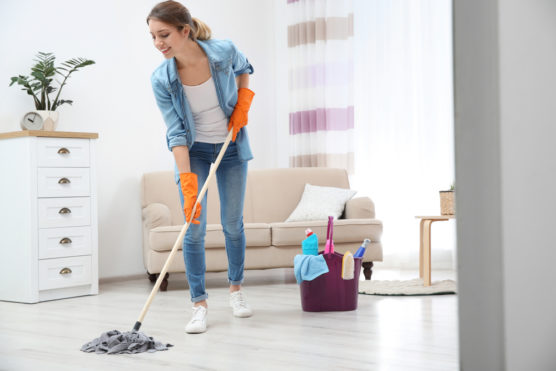 Half a cup of hydrogen peroxide per gallon of water is the simple homemade recipe to brighten dingy floors. It bleaches the marble, not the actual material perhaps but the latent covering that dulls the original facade.

Scrub gently so as to avoid any permanent scratching or scuffing. 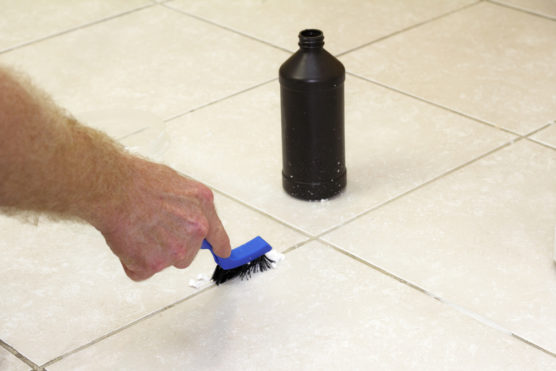 Grout lines are those essential features with regard to foundation and tiling that are there but often overlooked. Until they become so coated in the dirt that they attract one’s attention and then, dismay. It is advisable to frequently clean them- just a quick scrubbing with a 1:1 hydrogen peroxide- water solution that removes the dust and grime. 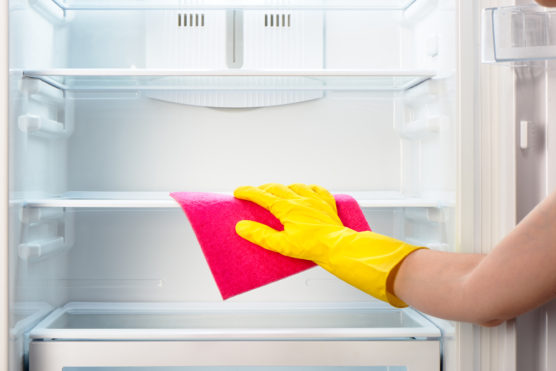 The inside of a refrigerator can really harbor bacteria growth- and the use of store-bought cleaners inside the fridge is not the best idea either. Hydrogen peroxide is a non-toxic compound and is deemed safe for use. Dab some onto a lint-less cloth or a microfiber towel and wipe the dirty areas clean. Follow up by using wet wipes to go over them again. 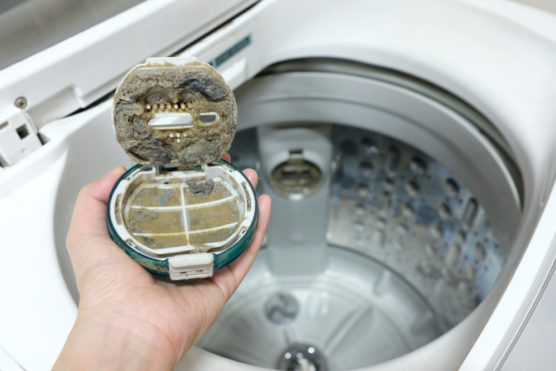 As with shower stalls and bathrooms, washing machines too are exposed to damp, and thereby, to mold and mildew. Add to it the frequent detergent cycles, and the likelihood of a buildup is certain.

For reasons similar to the ones that using toxic chemical cleaners for a fridge pose, washing machines too should not be subjected to toxic cleaning compounds. H2O2, on the other hand, can be used. Monthly cleaning is sufficient to ensure a clean inside.

To clean with a dirty rag or sponge or mop defeats the purpose. Soak your cleaning supplies in a solution of a half cup of hydrogen peroxide in hot water for an hour, at the very least. Rinse. This ablution process eliminates all the caked-on dust and dirt. 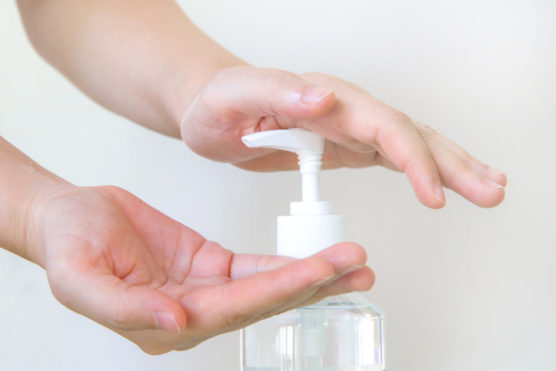 A lesser-known fact about H2O2 is that you can use it as safe and non-toxic dish soap. I prefer to alter this method with a twist of my own, which is that I add a few spoonfuls to my normal liquid soap for a sanitation boost. It induces better cleaning and effectively kills bacteria.

A handy hack I have come to love over the years is an H2O2 soak for toothbrushes. Toothbrushes (only the manual ones) are wont to acquire bits of food stuck in irretrievable places with use. And for people with gum/teeth-related problems, this poses a difficult quandary.

A hydrogen peroxide soak for toothbrushes does the trick because it cleans and cleanses, in addition to killing bacteria.

In regards to conclusion, there is not much to add in terms of the repertoire of hydrogen peroxide as a cleaning compound- that has been made abjectly clear by the points themselves. However, what can be said instead is of the addition virtues it possesses, in light of changing times.

It is non-toxic, eco-friendly, and inexpensive. Making the shift onto cleaner products employable for household functions is imminent, and H2O2 is a perfect example of one.